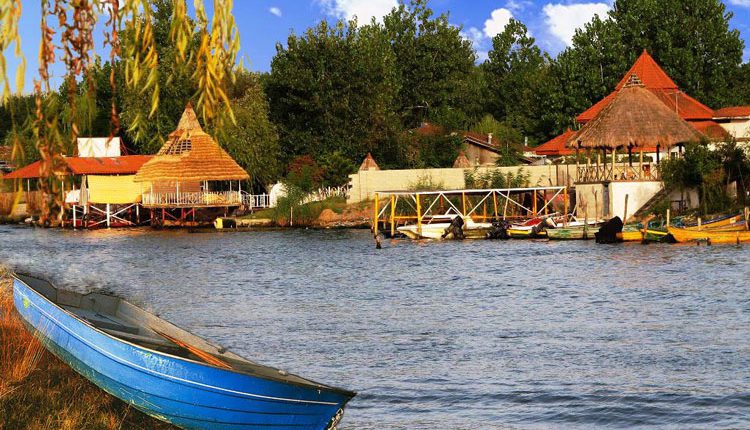 Iran has a four-season nature and due to its special geographical location, every corner of it can be seen by the beauties of its generous nature.

Gilan province in northern Iran and on the southern margin of the Caspian Sea is one of the most important parts of the country in terms of natural wonders and attraction of tourists, so that annually invites many tourists and naturalists.

Undoubtedly one of the most important and remarkable natural attractions and tourism areas in Gilan province is Anzali Wetland.

Anzali wetland or Anzali Lagoon is located in Gilan province and southwest of the Caspian Sea coasts. Its geographical features are 28 – 37 degree north of the northeast latitude and 25 – 49 degree east longitude. The Anzali town is bounded on the south by the city of Somaye Sara, on the east by Pirbazar and on the west by the Abkenar and Cappourchal.

According to the Ramsar convention (The Ramsar Convention on Wetlands of International Importance especially as Waterfowl Habitat is an international treaty for the conservation and sustainable use of wetlands.  ), wetland is defined: Wetlands are marshy, basin, peat land (dense brown to black moss masses) and aquatic habitats with natural, artificial, permanent or temporary water with static, running, fresh, saline or saline water containing those waters of a sea that ​​tidal depths not lower than 6 m (tide).

In other words, “wetlands or marshes are habitats created by the combination of onshore and marine ecosystems.

Geologically speaking, the lagoons are bays separated by a sand blade from the sea and called the bay. “Of course, some of them are hollow points formed by the earth’s crustal motions.”

Anzali Wetland, with an area of ​​over 20,000 hectares, is one of the first internationally registered wetlands in Iran, and its name was registered in the Ramsar Convention International Wetlands List in 1975. 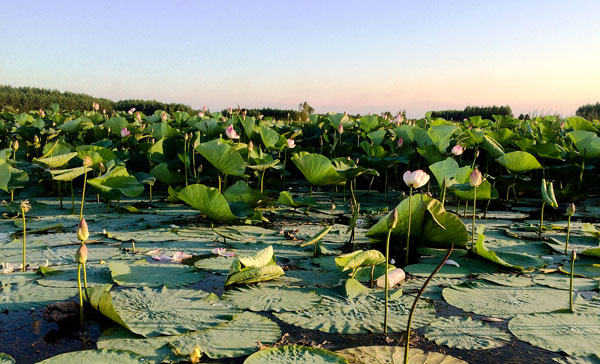 It is interesting to know, this wetland is just like the Koshiro Wetland in Koshiro Shitsogen National Park, Japan. This wetland, one of the most important wetlands in the country and a popular tourist center, is a natural habitat for many species.

Anzali Wetland due to its geographical location has a high amount of moisture and water and is unique among other wetlands in Iran.

This wetland is one of the freshwater wetlands which is located on the way of the rivers that flow into the Caspian Sea and plays the role of a treatment plant for running water in these rivers.

11 main rivers and 30 sub-rivers supply the water of the wetland and then irrigate the fields with surface flows into the Anzali Wetland.

Finally, this water conveyed to the Caspian Sea by a shipping channel that Supported by two breakwaters located at the Anzali Harbor Facility

The Anzali Wetland is known for its marshy tulips that cover the entire surface of the wetland from late June to late summer and provide dreamy scenery.

The marsh or lotus tulip or lotus is a plant with round, large, heart-shaped, green leaves with large flowers with thick, numerous pink petals coming out of the water and seen at the water’s surface.

The marsh tulip is categorized as a plant in the group of floating plants whose roots are in the water and the stems and leaves and flowers are floating outside the water.

Inside the Anzali lagoon, there is a facility such as the “Selke Wildlife Refuge” which is one of the valuable parts of wetland areas in the northern region of Iran and hosts many migratory birds annually.

Selke wildlife has an area about 360 Hectars and is located in the soutest region of Anzali wetland and within the Somesaray city limited. This region is one of the rare places where goose bride, swan and short goose choose as their habitat.

There is a protected area called Siahkim, in the southwestern part of the city, in the southwestern part of the wetland, where many plant and animal species live.This area, is ​​over 4114 hectares, is home to animals such as swans, goats, a special kind of ducks, crowned ducks, kutka, phylloops, hunters including eagles, sea lilies, delichehs, Kakai and….

The Siah Keshim region is well-known for breeding swallows and is the largest area for laying a special kind of heron which called gray heron in the southern Caspian Sea.

Gray herons are the largest herons in Guilan province, and more than 43 pairs of them live in the Siah Keshim Protected Area. The plant species in the area also include plants such as Louis, Ney, Jagan, Barhang, Asparagus, Apti, Trappa, Wet Tulip, Lotus, Seratophilum, aquatic species such as straw, coral, gypsy, and dry species such as alder. 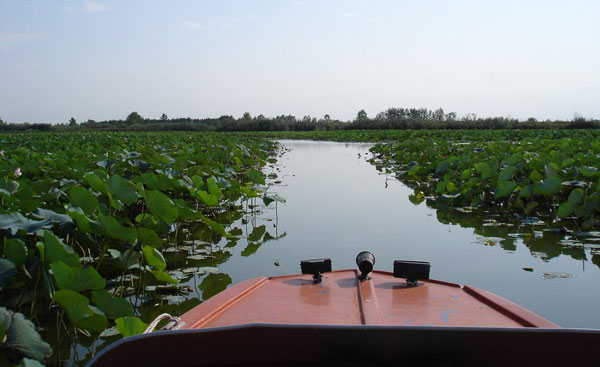 To the west of Salke Wildlife Refuge, there is an area called Sorkhankel, one of the country’s wildlife sanctuaries. In this area, migratory birds, such as swans, goats, chickens, and ducks, Tawosk, Yeloh and Kakae, migrate to the Indian Ocean in winter and spend their winters there. Indigenous fish such as perch, hatter, carp, wire, shark (duck) and migratory fish such as whitefish, white gypsies and gypsies also live in the coral reef. Most of the vegetation in this area consists of reeds and leys, with abundant azolla, tricolor, tulip, and hornbeam.

In the Anzali wetland, there is variety of diverse plants and these plants are including peripheral plants, floating plants, submerged plants, and land plants around the wetland.

Anzali Wetland is also home to a variety of animal species and species of birds, aquatic animals, mammals and even reptiles, amphibians, insects and rodents are found in the area

Anzali Wetland is a good place for migratory birds to enter Iran from neighboring countries. Among the Caspian Sea’s margins, the wetland is the best place for wintering, laying and hatching. The species of birds found in Anzali Wetland are as follows: 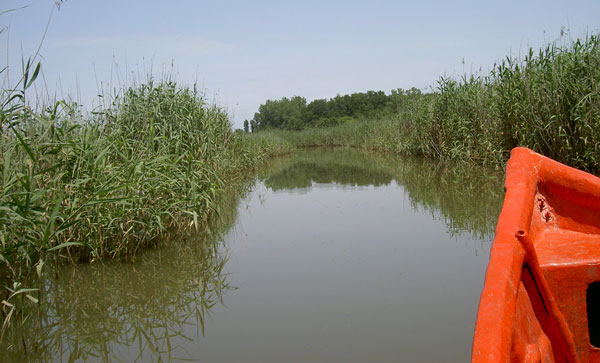 Their populations have been declining due to shrinking habitat and unnatural hunting and are highly vulnerable to extinction.

Also found in this area some reptiles such as three lizards, furry turtles, European pond turtles and snakes.

In Anzali Wetland, five species of frog have been observed.

Also, insectivores such as sagebrush and rodents such as the squirrel and the black rat live in the area.

Inside the Anzali International Wetland there are many small and large islands.

Boating in the Anzali Lagoon is one of the attractions that tourists love. In Anzali Lagoon, tourists can pay a raft for a fee and overlook the corner of the lagoon. Watching the migratory birds traveling from neighboring countries to Anzali Wetland is also another destination to enjoy. Kayaking and fishing are also available for tourists. Photographing the spectacular beauty of Anzali Wetland is one of the activities that attract tourists. Restaurants and cafés are among the other amenities in Anzali 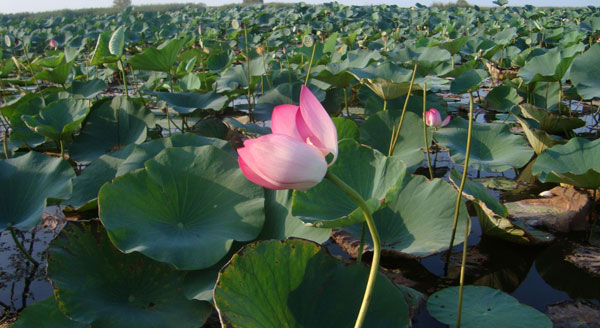 Anzali Wetland has economic value and can be used in the production of fertilizers, building materials and trace elements.

Prior to the year 1978, Anzali Wetland had a depth of 8 meters and it was possible to catch 7 to 8 tons of fish, but in year 2012 the depth of the wetland to 1.5 to 2 meters and in some areas, depth of water falles less than 1 meter. The Anzali Wetland, which is the heart of the line, is in complete ruin like many other wetlands and the country’s natural attractions and resources.

Introducing urban, rural, industrial and agricultural wastewater into the wetland, oil spills, settling of waterborne contaminants as well as the introduction of Azolla into the wetland, its growth on the wetland, preventing light from reaching the marshes and destroying them. They are working hand in hand to annihilate the Anzali Wetland forever and cause irreparable damage to this area and its people.

The Anzali Wetland has warm, humid summers and mild winters. The best season to travel to this area is spring and autumn, but keep in mind that if you are going to see Anzali Wetland, you should travel from late June to the end of summer.

Access to Anzali Wetland is also very easy. Just go to Guilan province and the port city of Anzali and take the boats that take you to the lagoon.